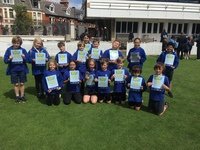 Well done to all the children who competed in the Year 5 & 6 Kwik Cricket competition at Jesmond Cricket Club. This was a fantastic event enjoyed by all. Hotspur entered two teams who both reached the semi finals where they played each other. Team 1 won the match which meant they progressed to the final. Hotspur played Wingrove in an excellent final and won the match. This was a fantastic achievement which has resulted in Hotspur going to represent Newcastle at the Kwik Cricket country finals later this month.